The other day, I sat in my dream car. Sigh. Motor Trend’s Car of the Year.

The sleek lines, the amazing interior, the very cool door handles (they are flat against the door until you touch them). I had to restrain myself from flailing my arms in excitement. The screen behind the car says, “My eyes were wide and my jaw has dropped.” Sums it up nicely. Except for one thing… 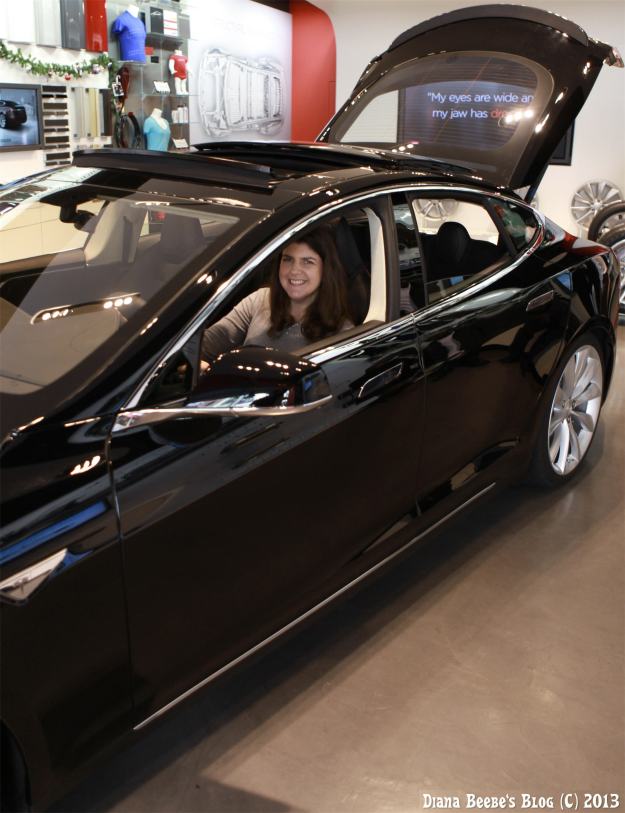 The salesman in the showroom approached us. Here’s our conversation:
Sales guy: Do you have any questions?
Me: No, I’m just drooling.
Sales guy: *Puzzled look* then *hearty laughter* That is the best answer I’ve heard ever!
Husband: Get the girls through college first.

I left the Santana Row Tesla Motors Design Studio willingly and with most of my dignity intact, much to my husband’s relief. I’m sure he had visions of my hanging onto the sleek, beautiful hood and clinging to it with desparation while begging for the sedan to return my love.

Ahem. Moving on while I have a shred of dignity left…

At dinner that night, a friend told us how he’d just gotten the delivery date for his own Model S.  We’d planned our visit too early.  I wouldn’t get to drive it.  *pout*

Could I invite myself back on the day he gets his beautiful, sleek Model S, so I could drive it?  And maybe pull a couple of fuses.  You must watch the video toward the bottom of the article.

My friend sent me that link with the note “For your drooling pleasure.”  I have it bad, don’t I?  Truthfully, I would be terrified to drive the car in that manner.

It reminded me of when I drove the Tesla Motors Roadster.

As if that’s not bad enough Tesla Motors also has the Model X. The ultimate crossover with the coolest doors ever.  My seven-year-old hopes that I’ll get that one so she can drive it someday.  Keep dreaming, kiddo.  You will not be parking that in a high school student parking lot.

I’ll keep dreaming, too.  I’ll try not to drool.  No promises.

A couple of years ago, I fell in love with an electric car.  This wasn’t any ol’ electric vehicle.  This was a Tesla–the Model S, specifically.

Photo courtesy of my friend Shannon Wells, who got to tour the factory

Tesla had just unveiled their design for their second car.  My husband (who knows me too well) showed me the announcement.

I was smitten (and completely ignored the price tag).

On a whim, I emailed Tesla to see if they had plans for a service center in Texas.  (Houston isn’t that far away…)  And they were going to be in town with a Roadster to film a commercial.  Would I like to drive it?

Was that a rhetorical question?  Not just yes, but heck yes!  When and where?

My husband and I had an appointment to drive one of the coolest electrice sports cars ever.

It was little bit terrifying (I was driving a car that cost almost as much as some small houses), exhilarating (that car was fast and the top was open), and amazing (let off the gas to break–deceleration was as much fun as the acceleration).

After we drove the Roadster, the Tesla reps gave us some swag.  My husband was batting his eyes a little, too.

My friend Shannon gets to drive her good friend, Scott’s, Roadster.  She gets to drive it a lot.  She gave me a video clip from her trip to San Fransico in the Roadster.  As soon as I get it in a format I can use here, I’m posting it so you can see it, too.

I’m a little bit of a nerd about the Model S.  I get the Tesla monthly newsletter.  I’ve built my own on their website a million times.  Don’t think I haven’t thought about plunking down the reservation payment, but then I remember that we have two kids to put through college first.  (The older one says, “Thanks for thinking of me, Mom.” *rolls eyes*)

One day, I was looking at the Tesla Model X when my younger one came in.  “What kind of car is that?  Are you going to buy that?  You could get that now and then I can drive it later.”

Let me explain.  We’d been trying to decide what car to buy (we’re still looking).  It needs to be one that the soon-to-be-driving teenager can drive later.  My younger one plans ahead for everything, especially if it means a cool vehicle for her.  All I could say was, “Wouldn’t that be nice?”

Tesla is going to be in town for Model S test drives soon.  I must clear my schedule.

Do you have a dream car?  What is your ultimate car experience?  I’d love to hear from you.