In some regards, my high school daughter is the Anti-Teenager. She avoids trends (especially in social media) and is comfortable doing her own thing. I can’t say too much about her non-teenager habits, because she’d get mad at me for sharing. I’ve already said too much. In that regard, she is very much a teenager.

Enter The Best Friend. She is my daughter’s oldest friend and like another daughter to me. They say, “We’ve known each other since before we were born.” It’s true. We moms were pregnant together, and the girls are only three weeks apart. They did many things together: kiddie gym classes, preschool, dance, sleepovers, playdates, trips to DisneyWorld,and anything else we could come up with. They are very much like sisters.

The Daughter and The Best Friend couldn’t be more different.

The Best Friend keeps me abreast of the goings on in the world of teenagers. She’s my friend on Facebook. She tells me about stuff that I would never hear from The Daughter. She also speaks as if she’s texting—shortened words and acronyms.

What? When did a tote bag get involved?

The Daughter translates for me (she doesn’t speak The Best Friend’s language, but she understands it). It means, “Oh my gosh, that is totally awesome.”

“Totes” is short for “totally.” It’s one of The Best Friend’s favorite words. It also doubles as “Yes, I wholeheartedly agree with you.”

The Best Friend loves Instagram. We haven’t ventured there yet. (I haven’t. No one else in the fam will.) TBF told me about a her friend at school who has tens of thousands of followers on Instagram. This girl gets five thousand likes or views or hits (whatever it’s called on Instagram) on any given picture on any given day. (She doesn’t use her real name, BTW.) Most of her photos are selfies.

Selfies. Self portraits, of course. I’ve been enlightened.

This ninth grader Instagram guru has very interesting hair. The Best Friend showed me one of her selfies. The brunette girl’s hair was pink. I mean pink. “Is that chalk?” I asked. After all, how are you going to get color to show up on brown hair like that?

Hot pink Sharpie permanent marker. Evidently, it’s the latest way for teens to color their hair.
Who knew? I didn’t. When I was in high school, we used different colored and metallic hair mousse. Sharpies were permanent markers and were mostly just black. (And I walked to school in a hurricane uphill both ways—there’s not enough snow in Texas.)
I had so many questions. How permanent was it? Does the marker damage the hair? How do they get it out? What if they don’t like the color? The Daughter said that they probably just use another color on top. (What does she know? She’s the Anti-Teenager.)

I should have texted The Best Friend and asked her. Instead, I tried it myself. I sacrificed a lock of hair and an old towel. My brown hair is darker than Instagram Girl’s, but you can see the color. 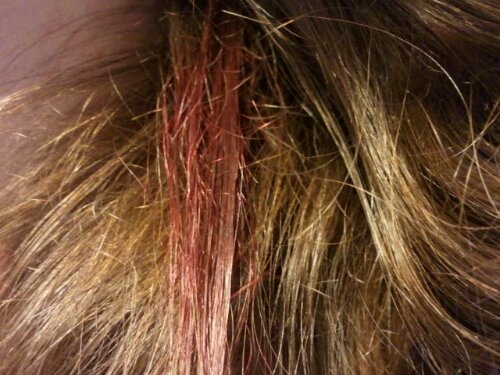 The things I’ll do for a picture…

I’ll be smelling that Sharpie marker all day now. Totes.

Do you have teenagers with strange, sheepish, or independent ways? Do you monitor your child’s social media use?