Comic books are awesome!  When I was little, I was so happy when we would get to buy them. I still have one of my very first comic books. It was Disney’s Scamp (Tramp and Lady’s errant son). My sister and I had a few others with that same level of fun and silliness.

Then there was my Thundercats stage, which coincided with my Spider-Man stage but didn’t last as long. I read DC comics, too, (Wonder Woman, mostly).

There is something to be said about kids and literacy and comic books–they can only encourage kids to read. I found this great article by Charlie Brooks, a geek dad, about getting younger kids to read by using comic books. He has good suggestions for comics that are kid friendly (and not violent and oversexed as some of the superhero and supervillain ones are).

What’s not to love about comic books? They are colorful and action packed and feed imaginations in ways that books and movies can’t.  Comic books give visual clues that we don’t get from novels and yet still leave more to the imagination than TV or movies. They can be a good gateway to reading books. (A gateway to reading, not drugs…sheesh.)

When I stumbled on the new My Little Pony comic books, I knew I had to get them. My kids don’t need encouragement to read, but they love the My Little Pony humor. I bought the first one and gave it to the girls to share. They loved it. This geek mom was so proud. *wipes eyes*

When it was time to get the next one, I tried to get them to go to the comic book store with me. Mockingbird looked at me as if I’d grown another head. Armadillo, on the other hand, squeed and said, “Comic books! Yea!”

At least one of my daughters is mine. 😉

The latest thing about comic books is to make at least three different covers for every edition. What? You want me to choose which cover I want? I want them all! 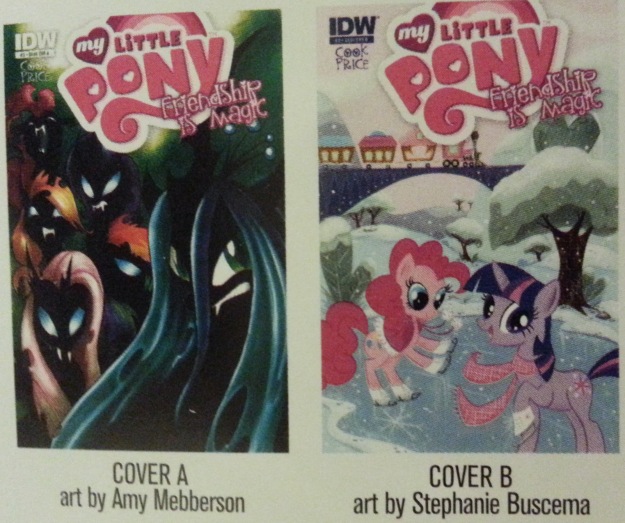 Which one did the seven-year-old Armadillo pick? Cover C wasn’t available.

Since buying more than one copy is not a viable option (unless it’s Spider-Man #700…*whistles and walks away*), I let Armadillo pick the cover she wanted. Do you think you can guess which cover she picked?

Are you a comic book fan? If so, what have been your favorite titles?